If you’re a regular at Pacific Northwest Ballet, you’ve had the chance to experience work by a bevy of choreographers. You’ve also gotten to dive more deeply into the dances of William Forsythe, Twyla Tharp, and of course, George Balanchine.

But PNB’s two-part celebration of Jerome Robbins' centenary, continuing this weekend at McCaw Hall, is something new and most welcome. Although PNB presented only seven of Robbin’s many ballets, the chance to see them in this format was exhilarating and illuminating.

Program A features four other Robbins’ dances: “In the Night,” a work for three couples set to Chopin piano music, “Afternoon of a Faun,” a haunting pas de deux inspired by Vaslav Nijinsky’s 1912 work, the iconic “West Side Story Suites,” and a new to PNB pas de deux, “Other Dances,” originally created by Robbins in 1976 for Mikhail Baryshnikov and Natalia Makarova.

I could write at length about any of these four ballets. Each is distinctive and we've seen most on other mixed bills. Seen consecutively on a single program, they provided so much insight into Robbins’ aesthetic.

Pantastico was equally dazzling with Seth Orza in “Other Dances.” It must be hard to tackle work created on such stars as Makarova and Baryshnikov, but that didn’t seem to daunt either PNB principal. Orza was solid as always; Pantastico moves across the stage like a smooth-flowing river. Watching her, I don’t think “wow, that’s hard,” or “wow, look at that intricate lift.” Well, I do think those things, but mostly I am awed by the way she owns the dance and the music, melding her body with it all so that the sum is greater than any single part. Watching a dancer at the height of her artistry performing work created by a choreographer at the height of his own is reason enough to go to the Robbins’ Festival.

Program B offers its own compelling draw: “Dances at a Gathering,” created for NYCB in 1969. Many dance writers acclaim this work for ten performers as Robbins’ ballet masterpiece. Set again to Chopin piano (performed by Christina Siemens), “Dances” examines human relationships and emotions in their varied forms.

From Lucien Postelwaite’s almost wistful entrance to Kyle Davis and Noelani Pantastico’s intricate and demanding scherzo, “Dances” provides the PNB dancers with an opportunity to shine. They didn’t disappoint. I expect PNB’s principal dancers to excel; in addition to Pantastico and Postelwaite, the family Orza (Seth and Sarah) provided some breathtaking work. I mean that literally. At one point, Sarah Orza is lifted into the air then spun around like a baton. She ends up head down, legs together straight up in the air. What??? In fact, the lifts, throws and carries in this work deserve their own essay. They are intricate, thrilling and, in the hands of these dancers, masterfully executed.

In addition to fine work by soloists Davis and Joshua Grant, company member Elle Macy demonstrated once again that she deserves every solo role offered her. Macy is all tensile strength, but she has a musicality and a charisma that really distinguish her work. (More Elle Macy!)

Watching “Dances at a Gathering,” I couldn’t help but think about the prior evening’s performance of “West Side Story Suite,” when the entire ensemble takes the stage to the song “Somewhere.” In “Dances” the ensemble enter in a similar fashion, strolling to their marks, almost the way people walk into a room in non-ballet life. The pieces couldn’t really be more different, and yet, they share a freshness, almost an American-ness, if there is such a thing.

Years ago, a Frenchman I know told me he could always tell an American; he said we have open faces, we smile more than Europeans, we anticipate the possibilities. I don’t know if that’s still how he thinks about Americans, or if he meant only white Americans. I do know that Jerome Robbins’ dances have that same feeling of anticipation and possibility. Even the Part B closer, "The Concert (or The Perils of Everybody) has a silly, slapstick anything-goes quality. The characters in this dance are more "Fancy Free" than "West Side Story," but they share that quintessential American quality of hope for the future. If I had any quibble with PNB’s Robbins Festival, it’s that it’s not comprehensive enough. Where were “Glass Pieces” and “Fancy Free?” And the 60-odd other works we didn’t get to see?

That may have to wait until his bi-centenary. For now, you still have a chance to catch the Jerome Robbins’ Festival September 27-29th at McCaw Hall. By the way, Program A only has one performance, Saturday evening the 29th so get your tickets now.


Posted by rowermarcie at 2:07 PM No comments:

I’ve said it before, but it’s worth repeating: one of the biggest gifts Whim W’Him Artistic Director Olivier Wevers brings to Seattle dance fans is the opportunity to see new works by contemporary choreographers from around the world. It’s a gift that keeps on giving.

Last weekend Wevers’ company kicked off its ninth season with its fourth annual ‘Choreographic Shindig,’ a program curated by Whim W’Him’s seven dancers. The three works on the program highlighted the dancers’ technical and artistic range, and they delighted Whim W’Him fans on opening night.

This Choreographic Shindig was bookended by two very kinetic works, each stunning in its own right.

Alice Klock’s “Before/After” opened the show. It’s a hauntingly evocative dance, enhanced by Michael Mazzola’s lighting design that seems to place the dancers in an undersea world where they tumble and float beneath his watery illumination. I say tumble, because from the get-go, when Karl Watson catapults onto the stage, these dancers energetically propel themselves across the floor: somersaulting, pushing up into handstands with bent knees and flexed feet.

There are also moments of stillness, moments where you feel as if the dancers embody ancient Greek or Egyptian mosaic murals. Whim W'Him newcomer Jane Cracovaner, slightly crouched, holds her arms bent out at the elbows, her hands nearly touching, face angled every so slightly.

But moments of repose are few in this work, a chance for the dancers to breath before leaping, literally, up from the floor in sequence, each dancer tapping or butting the next into movement. It’s a bit like watching one of those domino lineups, where every tile tilts into its neighbor, causing it to fall down into the next and the next, until all the dominoes are flat on the floor. In this case, though, instead of falling to the floor, the dancers jump up, one by one, in kinetic unison.

Omar Roman de Jesus ends the show with the equally kinetic “Welcome to Barrio Ataxia,” a rumination on the physical condition that causes imbalance and muscle tics, among other symptoms.
That sounds grim; “Barrio” is not. The dancers enter to peppy Latin dance music, shimmying and shaking and mouthing the song lyrics. The cheery song gives way abruptly to a slower, more introspective, sound track, and the shimmies evolve into something more deliberate as well: the dancers ooze across the floor, their hands slowly tapping out a rhythm on their upper thighs.
Adrian Hoffman and Jane Cracovaner separate themselves from the collective dance drone, performing a duet that serves as a highly physical counterpoint to the movements that surround them.

For me, though, Cameron Birts’ final solo is this work’s indelible moment. I wish I had a photograph to show you, but that wouldn't capture the magic of the live performance.

Birts is short, with disproportionately long arms for his torso. He’s able to isolate his limbs, imbuing them with independent motion. Have you ever seen those plastic human or animal figures, each limb connected to the other by elastic filaments, the whole figure mounted on a small pedestal? The ones where you press the pedestal and the figure sort of collapses, limbs jangling? Well, Birts can make his human body do something like this, long arms flapping independent of tilting shoulders and undulating lower back. 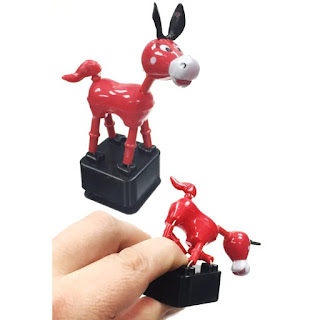 Meanwhile, he’s transferring his weight slowly from leg to leg. All of this takes place under a ghostly white, diffuse spot light, while Birts’ fellow dancers slowly move upstage into the shadows.
As I said, indelible.

Equally indelible was the program’s third work, created by Brendan Duggan in collaboration with the dancers.

“Stephanie Knows Some Great People” begins with the house lights on, as Karl Watson mixes drinks for an upcoming house warming. We soon learn that Watson and his partner, Cracovaner, are two of the most pretentious people. They've thrown this party to show off; we see them herd their guests around their new digs, pointing out such highlights as vegan fur drapes and fancy appliances. Oh, and the view! Wow.

The guests are a mixed bag: from Jim Kent’s nerd who can scarcely believe his luck to snare a date with Mia Monteabaro’s gum-cracking hottie, to wonderful Liane Aung, so fizzy and tipsy that her long-suffering date (Birts) literally holds her up. I suppose I could carp on the implications of a drunken woman and the potential for sexual violence. I won't, because that's not the intent behind the imagery.

The superficial chatter is smashed all at once when Adrian Hoffman’s odd-man out character boils over in frustration. And when the  mask cracks, we can see the person who hides behind it. Hoffman is actually Watson's alter ego. They move in tandem, not so much mirror images but rather a reminder that things--and people--are not always who they seem to be.

I’m writing this essay several days after seeing "Choreographic Shindig IV", and I can still see so much of the evening in my mind’s eye—always a sign of a successful performance. I love Whim W’Him’s Choreographic Shindigs, and this 4th installment may be the best one yet. It’s a great way for the company to start a season, and a great unofficial kickoff for the fall arts season.