She's Too Fat To Dance! Or Is She? 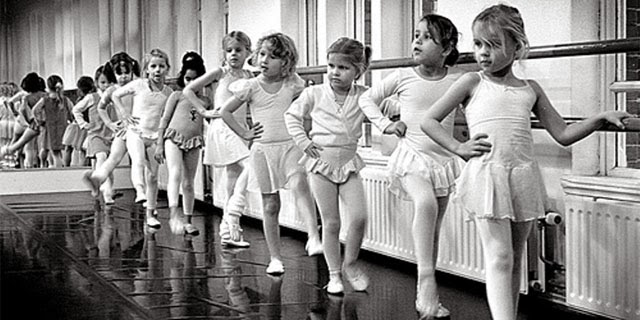 When I was five years old, I wanted to be a ballerina more than anything in the whole world. Me, and probably half the little girls in America. The other half wanted to go horseback riding.

I don't know when or where I got this urge. I grew up in Detroit, and believe me, there was no ballet company in residence. I do remember being taken to see the Kirov when they came through on tour. Or maybe it was the Bolshoi? Russian/Soviet, in any case, and a really big deal.

Alas, my ballerina dreams were shattered not long after my mother enrolled me in a dance class in kindergarten. This was more than half a century ago, but I remember the day of the recital very clearly. My group was dressed as bumble bees, little black leotards and yellow headbands with antennae attached. Through the wispy curtains of time, I still recall the sense of humiliation I felt when I looked at the other little girls. They were slim and reedy. My chubby tummy bulged out. Even at that age, I knew I was too fat to dance.

Several years ago, chief New York Times dance critic Alastair Macauley kicked off a shit storm when he wrote of New York City Ballet principal dancer Jenifer Ringer that, in the role of the Sugar Plum Fairy on opening night of "The Nutcracker," Ringer appeared to have "eaten one sugar plum too many."

The dance world responded immediately, most defending Ringer and challenging the assumption that a ballerina had to have a particular body type. Macauley defended his original column.

Jenifer Ringer told me that after an initial feeling of horror upon reading Macauley's scathing words, she took a deep breath and relaxed. In 2010, Ringer was self confident in both her dancing and her body. If this had happened twenty years earlier, though, Ringer would have been devastated. It turns out that Ringer suffered debilitating eating disorders at the outset of her professional career. She was hired at NYCB at the age of 16, one of four students from her class at the School of American Ballet who were offered jobs with the company. Ringer was acutely aware that her curvier body type was rounder than those of many of her fellow company members. She stopped eating, then became anorexic. A year or so later, still almost paralyzed by negative self image, Ringer started to binge-eat junk food, balancing out each quart of ice cream with frantic exercise.

Eventually, Jenifer Ringer gained so much weight that, ultimately, NYCB asked her to leave the company. Ringer says she had to hit that bottom to figure out how to gain some control over her mental health and her eating. The story has a happy ending: through her religious faith, and the help of a fellow dancer who she later married, Ringer worked her way back to her professional dance career. In her new memoir "Dancing Through It," Ringer chronicles that period of her life.

Ringer's experience reminds me of a visit I paid last year to All That Dance, a multi-generational dance school in Seattle. Every fall, the school suspends regular classes for "Love Your Body Week." It's a chance for teachers to talk to the students about body image, healthy eating, and potential eating disorders. The large mirrors in the studios are covered with butcher paper; by the end of the week, that paper is covered with dozens of handwritten notes. The students scrawl things they love about their bodies, or what their bodies can do in the dance studio.

All That Dance founder and director Maygan Wurzer doesn't keep data to track what happens after her students leave. She has no proof that making kids, in particular, aware of potential eating and body image issues will prevent crippling disorders like Jenifer Ringer suffered. But Wurzer says over the years she's watched kids who grow up attending her school; she's observed how they behave. Wurzer's convinced they have a healthy awareness of and attitude toward their bodies.

Jenifer Ringer says these days, New York City Ballet actually has counselors available for the dancers. But she's not sure whether people seek out help. Ringer says 20 years ago, she lied when people asked her what was wrong. She thinks that some professional dancers may do the same thing today, despite the availability of help. More to the point, Ringer says as a society, we still value thinness, and we expect it in particular from professional ballet dancers. She doesn't think things will really change until general attitudes about beauty and weight change.

So, will we ever see plump ballerinas in the mix at professional companies, like New York City Ballet or Pacific Northwest Ballet? I can't imagine it, and that's partly because the physical demands of the profession keep dancers fit and lean, for the most part. Might we see a different mix of body types: women with bulkier muscles, for example, more womanly hips and breasts? Part of the change will have to come from those of us who watch dance, and write about dance, and think about what's beautiful onstage.

I think back to my five year old self, to my ballet dreams. I know now that I never would have made it as a ballerina, not only because I was too fat. Turns out, I'm a klutz; I'm far more aware of my thoughts than my body's position in space. That was true then, and it's true now. These days, I live vicarious ballet dreams. That's fine with me.
Posted by rowermarcie at 1:09 PM